Gandhi had a close-knit but somewhat tumultuous relationship with Madras which in over fifty years he would visit twenty times.

In 1896 Gandhi first visited Madras and newspapers reported that he ‘read out’ a protracted speech which the crowd at Pachaiyappan hall was patient enough to hear fully.

20 years later and a satisfactory orator by now,  Gandhi stayed in recently renamed George Town (with its freshly installed statue of the King Emperor).

‘Kappalottiya Tamilan’ V.O. Chidambaram having endured torture in jail and destitution after release stood amongst thousands to see Gandhi arriving. Requesting a private interview, VOC was offered ‘a few minutes’ at six in the morning. VOC, a shipping baron once by now could afford only a tram ticket and with the service starting at 5.30am excused himself “for having intruded upon your precious time”. But Gandhi insisted and they talked about the money raised   in South Africa for VOC’s defence which had not turned up in India. A year later Gandhi would faithfully send the “Rs. 347-12-0”.

Gandhi also saw the play ‘Harichandra’ enacted by Pammal Sambandam and his troupe in at Victoria public hall.

in 1916 with little tidings except the date on which Gandhi was arriving, crowds surged the central station for every train that puffed in. And sorely disappointed most had dispersed when he actually reached. Touring the Victoria students’ hostel, Gandhi was surprised to see so many eating messes (Smaartha, Iyengar, Andhra, Kannada and others) and chided the students.

When Bharathi walked unannounced into Gandhi’s room he was not even introduced. The Mahakavi invited the Mahatma to preside over a congregation and though the latter declined, the bard left blessing him and his crusade. A spellbound Gandhi enquired on his identity only after Bharathi left. Gandhi also presided over a college debate, marking the inauguration of Madras Christian college debate society. 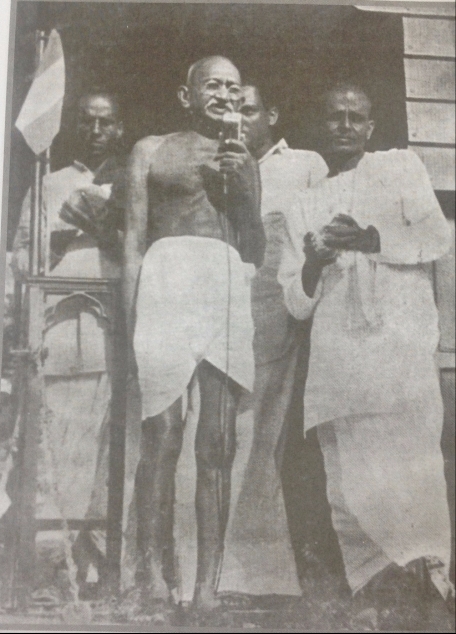 It’s surprising today that George Town once had a beach big enough for a Public meeting (it existed opposite the high court). In an assembly presided by trade unionist Bp Wadia, Gandhi encouraged Madras workers to demand their just wages but also toil as hard as those emoluments deserved.

In September 1921 a fully clad Gandhi would leave for Madurai from Madras and there in few days adopt his “half naked fakir’ costume that would become his trademark thereafter.

Subsequently Gandhi turned up in a Dhoti to the dress code conscious Cosmopolitan club, a visit which the president Thyagaraja Chetty (of Justice Party after whom T nagar is named) deliberately boycotted.

Gandhi believed that without Hindi, national integration was unachievable and sent his son Devdas Gandhi  to Madras as its first Hindi Pracharak. Devdas would marry an Iyengar girl-Rajaji’s daughter. (the Maharastrian priest  though well-disposed to the intercaste marriage insisted the groom wear a holy thread to marry a Bramhin girl.) An upanayanam was performed just before the wedding.

While addressing a group of Madras based Gujarathis Gandhiji would say, “You people go to far off lands, exploiting people. I am now going to exploit you.’ Not taking offense most women donated their jewellery to his fund.

1936 possibly was one tour when on the way to the public meeting, a group of ‘self-respectors’ with black flags protested the Mahatma with placards of “Go back Gandhi”.

Gandhi visited Madras for the last time in 1946 for the much delayed silver jubilee of Hindi Prachar sabha. Where Gandhi alighted (Ambattur) was kept secret and the police even posted decoy teams in other stations to divert the people. Gandhi obstinately would not speak a word other than in Hindi. When the Tamil audience grew restive, Gandhi rebuked them “…that time was past when I used to address you in English. I have decided to reserve my English for English men”

The British governor sent a car to pick him up for dinner at the palace and the British parliamentary committee too would meet him.

“Your criticism soothes me. Your silence makes me nervous” were the words Gandhi had once written to his Round table conference mate Srinivasa Sastri. Gandhi took time off to go to the general hospital to see the old comrade who was dying.

The politics in the local congress was well known and before the visit ended, reporters would even embarrass Gandhi by asking if he had come to politically rehabilitate Rajaji (who had exited the Congress in a huff).

Gandhi wanted to inspect the ornamental gates of the Hindi Prachar Sabha and walked onto the Thanikachalam road. Realising the other gates were faraway, suddenly he flagged a corporation bus destined for Mylapore and was dropped in the next gate. The crew and the passengers were pleasantly surprised but it was understandable if nobody home would have believed the story.

In 1948   Gandhi’s demise brought spontaneous grief to Madras. Men shaved their heads and bathed in the sea by thousands. His ashes were viewed by many. The corporation committee even passed a resolution requesting the government to rename Madras city as  Gandhipattinam.

View all posts by madrasminutes